LINCOLN, Neb. — After completing military service, veterans can have a difficult time finding employment when returning to civilian life.

Former naval officer Tom Wolfe’s Out of Uniform, Second Edition (Potomac Books, 2018) is designed to help all transitioning military personnel, regardless of service, branch, rank, rating, time in service, time in grade, or specialty. Although all service members share common denominators, each individual brings something unique to the job market. 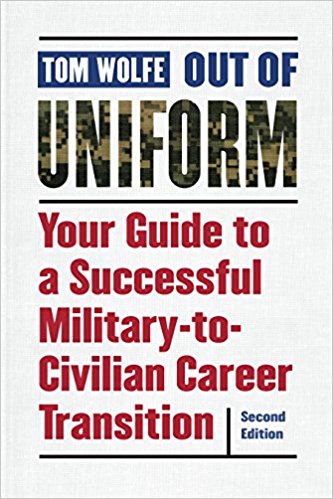 Not only does this book cover the basics—search techniques, networking, interview preparation, résumés, and negotiation—it also offers guidance on topics that are often overlooked, specifically the central issues of self-knowledge, interviewing empathy, and the power of questions. This new edition includes a new foreword from the author, updates to 38 of 83 chapters including statistics, web sites, data, and images, and a new chapter on social media.

“With the exception of leaving civilian life for the military, no professional change is more cathartic or challenging than the transition back out of uniform,” said Lt. Gen. Dan Christman, U.S. Army (ret.), former superintendent of the U.S. Military Academy. “Key for success is preparation, both mental and emotional. Tom Wolfe provides the indispensable guide to help you both prepare and succeed.”

In addition to the technical guidance, readers will also discover important information in the anecdotes based on the experiences of soldiers, sailors, air force personnel, and marines. Out of Uniform, Second Edition is an invaluable resource for veterans who want to make the most out of their civilian career opportunities.

“We owe our military service members so much, including the right to compete for a job when they leave the service. Out of Uniform just might give them that competitive edge. Are you a veteran? Read it! Know a veteran? Make sure he or she has a copy!”—Mike Krzyzewski, U.S. Army veteran and Duke University men’s basketball coach – 2017-09-18

Tom Wolfe graduated from the U.S. Naval Academy, served as a surface warfare officer in the navy, and completed tours of duty as a flag aide, communications officer, and administrative department head. Formerly a senior partner at Career Development Corporation, he provided guidance to separating military personnel for almost thirty years. His columns and articles have appeared regularly in digital and print media, including Military.com, Military Transition News, Stars and Stripes, G.I. Jobs, TAOnline, and Veterans of Modern Warfare.

As the largest and most diversified press between Chicago and California, with more than 3,000 books in print, the University of Nebraska Press is best known for publishing works in Native studies, history, sports, anthropology, and geography, American studies and cultural criticism, and creative works. For more information, visit nebraskapress.unl.edu.