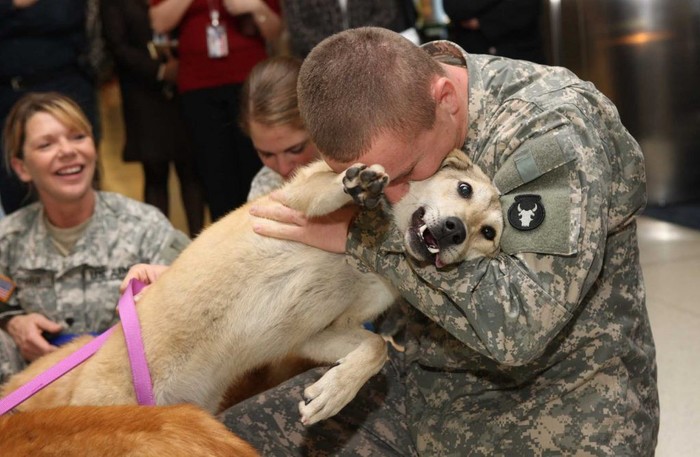 War has a profound effect on the human body and the human psyche. For many veterans, post-traumatic stress disorder (PTSD) arising from their war experiences has a halting experience in their lives. They often suffer from guilt, shame, isolation, anger, among many other ordeals often incomprehensible for civilians.

PTSD is highly prevalent among returning service members. Among the U.S. troops that served in the overseas war in the past 13 years, over 500,000 veterans have been diagnosed with PTSD.

The impact of service dogs for treating PTSD

Among the several treatments tried and tested for PTSD, there are also people who believe that trained service dogs can help individuals battle their traumatic disorders. There are a number of media reports and testimonials from veterans who had experienced positive differences with the help of service dogs.

In 2020, a study was conducted by the College of Veterinary Medicine of Purdue University regarding the subject. They looked into what trained tasks performed by service dogs are most helpful for veterans with PTSD.

Service dogs have been reported to help with several PTSD symptoms such as nightmares, experiencing flashbacks, and particularly in being hyper aware in public.

There are also other emotional benefits. Whether or not you are getting the dog to help with PTSD, they make for great pets by offering companionship, taking orders, and can help you reduce stress. They will also encourage you to get out of the house more often and spend time outdoors.

What does the Veterans Administration Have to Say?

While the official VA website points out the merits of dogs, they also point out that there have been only limited studies to draw evidence-based conclusions. Unfortunately, this translates to the fact that the VA does not pay for all costs associated with the dogs.

On average, it can cost anywhere between $20,000 to $30,000 to train a service dog. Though the department initiated a study in 2011, it was not fruitful enough to derive results from. The project was halted later in 2012.

There is a relatively new clinical trial going on that was initiated in 2017. This study's results may help veterans receive financial aid from the VA to get a service dog.

As of now, veterans with service dogs can get veterinary care through VA Prosthetics and Sensory Aids Service. However, the expenses required for the boarding, grooming, food, and any other routine expenses will have to come from the individual's pocket.

Most available studies on this issue suggest that service dogs cannot be considered a standalone cure for PTSD. They can help with the veteran's life's specific aspects, but they cannot be the only treatment offered.

A well-trained service dog can help all individuals with different physical as well as mental disorders. How much this impact would extend would depend on the connection and relationship one has with the dog. The more you cherish them, the better they can make you feel. In the meantime, the progress that the studies make should bring some good news to all veterans in the forms of financial support as well.